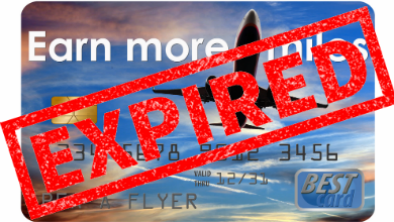 As with all Air Miles collectors, I was shocked and worried. They expire after five years? Uh oh. Starting when?

Turns out that it starts after this year. December 31st. Which is a blatant bait-and-switch, but by the time the courts get that figured out another five or six years will go by. That’s when the class action lawsuit gets rolling and finally wins. And then factor in a couple more years for Air Miles to make good (and the company may just decide that filing for bankruptcy is easier than doing that).

This is an obvious indicator that Air Miles is in financial trouble. And I use the term “financial trouble” loosely here, meaning that the company could either be losing money or the millionaire bigwigs aren’t making enough to finance their 10th home. One of those.

Besides taking away your strategy of saving up Air Miles for 10 or 12 years (so you can get something really, really nice), Air Miles is up to some pretty shading stuff. Their website is tough to navigate, but there is also speculation that they are hiding some of their rewards from people who could redeem them. I thought, when I was trying to find something to order (because I felt pressured to, but more on that later), that the rewards offered were pretty shitty. The selection was horrible – far worse than in prior years. But with the speculation above, it all makes sense.

Back in May or June, I went to the website and requested an Expiry Statement. I had (only) just then heard about the points expiring at that time. I’ve been a collector for over 22 years and this news was alarming. Anyway, I waited a couple of days for this report to arrive in my inbox and when it did not, I spent several minutes going through my junk mail. Still nothing. I went back and requested it a second time.

Two months passed, it was a busy summer, but then I was reminded again of Air Miles. So I went back in and requested another Expiry Statement. A month went by and I realized that I again didn’t get one. I requested another one, this time double-checking my account to ensure that the right email address was there and everything was in order. It was. And my email account doesn’t block or filter junk at the server, because I don’t use hotmail or any big email account – I have my own server and domain name. Last week I ordered another Expiry Statement. The next day I tried to contact them. After weeding my way through their “help” (term used loosely) section, inundated with FAQ’s and other useless obstacles, I clicked their live chat and was told I was third in queue. Thirty minutes later I had to get back to the kids, so I had to give up waiting.

The next day I tried again, with a similar result. Except this time I also called their phone number. I waited 20 minutes this time, with no result. On November 30th I requested yet another Expiry Statement and it hasn’t come as I write this the next day.

A month ago I redeemed 5000+ Air Miles for a snow blower. It was the best of a bad selection of rewards. But I would have rather just left my Air Miles in there. I’d like to stockpile a big amount and get something (or some things) nice at my own leisure. But I felt tremendous pressure to redeem. Maybe I would lose 3000 Air Miles on January 1st? Or maybe I wouldn’t lose any at all – I had been three years since I last got something (Espresso Machine) so maybe that burned off the older Air Miles. But the point is – I didn’t know. And had no way of knowing. Trying to get an Expiry Statement is apparently as difficult as stealing documents from the CIA.

This morning I got a notice from Air Miles informing me that the snow blower has shipped. I replied to that notice and explained my difficulty in getting a hold of someone and getting an Expiry Statement. I was so happy to finally have an email address for someone I could actually talk to over there! But no, I got an automated email back that provided me with a link to their fantastic Help section!

This whole thing is a disgusting moneygrab that is probably illegal – but by the time we (and the courts) get it all figured out, most of us will have moved on. Which I think was the point. I spoke to my Dad about this the other day and he said that he tried to get a statement about expiring points as well. Didn’t get one, so he’s pretty much shrugged his shoulders. He’s done with Air Miles and doesn’t care that he loses them all for nothing. Air Miles is relying on this very attitude. If two million users just shrug and give up their Air Miles, and move onto other loyalty programs, then Air Miles makes millions of dollars in the short term. All those miles unredeemed!

When I began this post I had the Chat window open and I was “number 4 in line”. Here I am 40 minutes later…and I’m “number 4 in line”. There’s probably no line at all, and that’s just an automated statement. Is anyone even working in customer service? 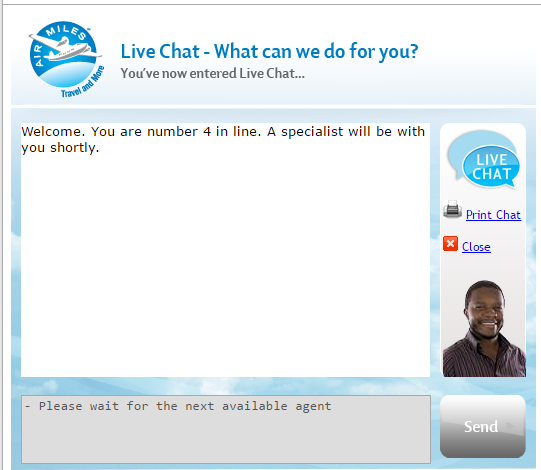 Transcript of my Online Chat. The wait time turned out to be 100 minutes:

As for expiration – I have zero Air Miles expiring between now and next September. I wonder what it would be had I not redeemed for that snow blower?

Update: All for nothing! Take a look at this. Air Miles has decided to cancel the expiration policy altogether. They smartened up, but was it too late?

And now I have to decide if I actually do want that snow blower (hey, it was bought under duress!)